Daniel Schröer is the CEO of Futura, a company specialising in digital, toxin-free pest control solutions, based in Germany. He’s also the host of the popular pest management podcast Talking Pest Management.

We tasked him to look into his crystal ball and share his thoughts on what ‘digital pest control’ means for the sector. Will we soon all need to be IT engineers to catch a rat? 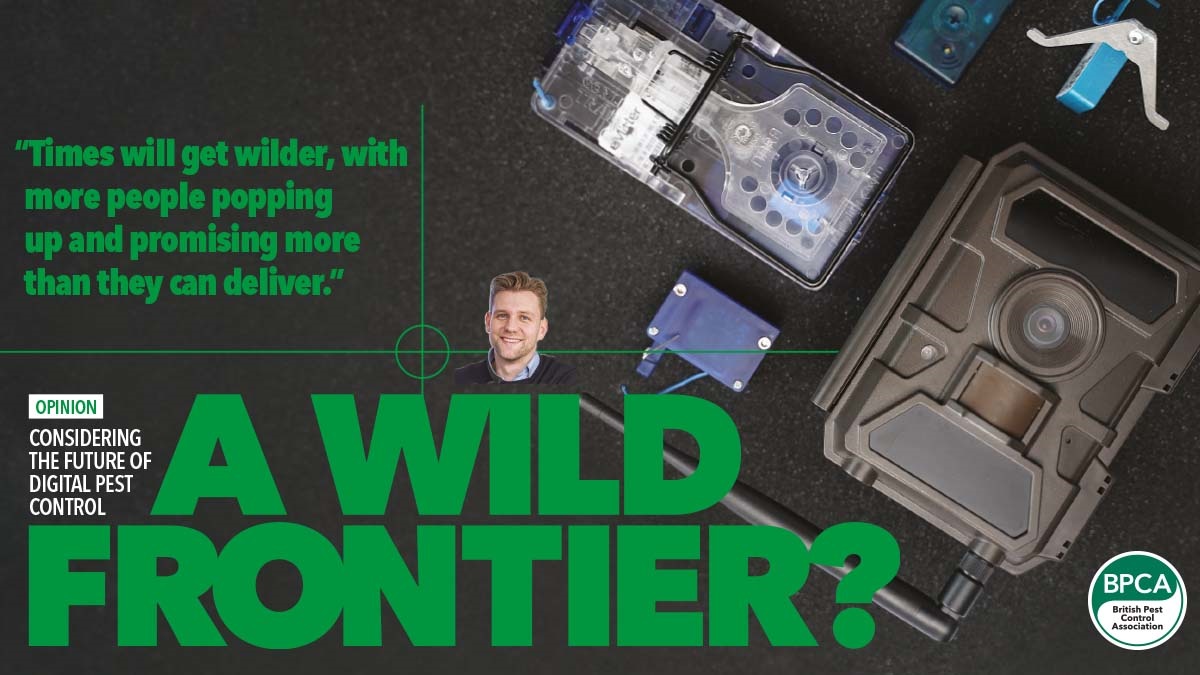 In 2005, we invented the first digital mousetrap. Sixteen years later, digitised IoT traps have made it to the annual reports of the large corporations of our industry. But did they make it to every shop floor or every warehouse? Not at all.

Experts like Bobby Corrigan said in 2015, “It’s a no brainer,” and we were convinced IoT sensors, cameras, and AI-driven traps would reign supreme over the next five years in pest management.

Well, they haven’t yet.

They’ve been present, but they didn’t ‘pop’ exponentially – for now, at least.

Here are my thoughts as to why; some will likely surprise you!

Building a smart trap is like building and understanding an iPhone.

You need to build the product, the software for the product, connect it to the internet, have everything certified and approved, host secure servers, work on algorithms, build an app and web portal, deploy a service, sales and marketing team and much more.

When the product is finished and hits the markets, it suddenly sends 30 false alerts per day, isn’t protected enough against dust, water and corrosion, or doesn’t have a connection to the internet despite the installation of 12 costly repeaters.

This is a common problem for a start-up that smells ‘big money’ with potentially millions of traps to be connected over the next decade, and I’ve experienced it over a dozen times.

The entry barrier for start-ups is significant, and the fail rate is high.

Most new entrants make basic mistakes like using the wrong standards such as WiFi (not secure and low distance), Sigfox or LoRaWan (both are decentralised networks, trying to tackle Telekom, Vodafone and the likes with little success).

The entry barrier for start-ups is significant, and the fail rate is high.

Many start-ups sell an idea and a 3D printed prototype with great sales and marketing endeavours for a tried and tested product.

I’ve witnessed and befriended many entrepreneurs who’ve fallen for it in the past.

They invested five or six-figure amounts into a solution that, after installation, stopped working after weeks or months.

Of course, the money was gone, and so was the start-up. Entrepreneurs lose trust, and the transformation again loses speed.

Good tech is complex! It’s one thing to create a prototype, but another to maintain, update and service it over ten years.

As a serious pest control service company, if you look ahead 10-20 years, you will agree that 10-20,000 IoT sensors could become a reality even for mid-sized operators.

Well, would you buy these from a young start-up and lever all your risk on them? Technology is complex and needs trust and years of validation.

Little tech companies in our industry can offer this reputation, but you have to find them before you risk that the investors of the start-up sell their equity to the next competitor of yours with your data.

All of this doesn’t just apply to the IoT tech solutions; think of all the software companies out there. Software should be ‘easier’ to realise as it’s ‘just code’ with no product involved.

But still, the same obstacles apply.

Good tech is complex! It’s one thing to create a prototype, but another to maintain, update and service it over ten years.

What do I think the next five to ten years look like?

Times will get wilder, with more people popping up to overpromise and underdeliver.

I made a video in 2015 about how IoT can be a large financial risk to your business and that my main advice is to buy a few different products and test them for a year.

Ask as many questions as you can and try to become a professional yourself. I uploaded a 15-question webinar for this in 2016. It’s still online, and just as accurate and valid as today.

After this initial investment, you’re likely to eventually find yourself with 10,000 sensors surveilling your pest boxes ten years down the line.

Imagine having invested over £1m, and then this start-up sells to your competitor with your data or goes bankrupt and discontinues the product!

The next five to ten years will be very relevant for our digital future.

Be patient; you won’t miss out on anything.

Don’t let yourself be sold to, based on a promising marketing presentation.

Try to educate yourself slowly by speaking to the right people and asking for their cost-free advice. And sooner or later, the right product will appear.

It’s a slow transformation, but it makes so much sense considering efficiency – it’s inevitable.

The big corporations of our industry will deploy over 500,000 devices until the end of the year, and approximately 3,000,000 until 2026. This leaves them with an army of fragile IoT sensors of an ‘early generation’ developed around 2016.

These ‘legacy’ systems will soon get replaced by better, smaller, longer-lasting solutions from other companies that the clients will prefer and demand.

Of course, the pest managers will remain gatekeepers, but the clients will drive the change to the modern iPhone from a Nokia device. And the Top 200 companies in this industry will be the drivers of this change, and it will be quicker than we all expect it to be.

IoT
The Internet of Things describes physical objects that are embedded with sensors, processing ability, software, and other technologies and that connect and exchange data with other devices and systems over the internet or other communications networks.

IP
Intellectual property (IP) refers to creations of the mind, such as inventions; literary and artistic works; designs; and symbols, names and images used in commerce.

Sigfox/LoRaWan
Different standards of low-power wide-area networks. They’re different methods of connecting devices together as part of the IoT.