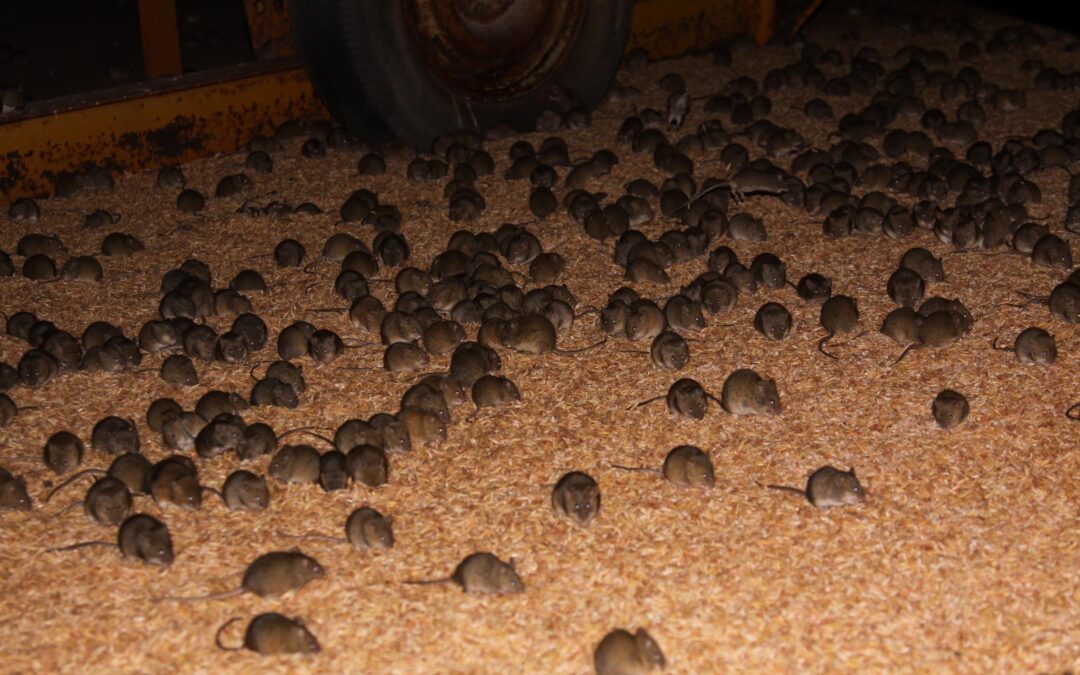 The house mouse (Mus domesticus) was introduced to Australia by the first European settlers during the late 18th century. Its distribution is now widespread throughout the whole of the country, but it is in the key grain growing areas of southeastern Australia where mouse numbers have had the greatest impact.

With the start of another surge of rodent activity being reported, Gerwyn Jones, Asia Pacific Manager for PelGar International outlines some of the reasons for mouse plagues and potential outcomes.

Mouse plagues have been regularly reported in Australia, the first being cited in a Victorian newspaper in 1917.

On this occasion, in the town of Lascelles in the state of Victoria, around 200,000 mice (3 tons in weight) were caught in one night.

By the end of June 1917, a total weight of 544 tons, equating to some 32 million mice, had been reported from this one plague.

Since then significant mouse plagues have appeared regularly in the country causing major losses in agricultural production.

In 1993 one of Australia’s worst mouse plagues hit the grain-producing areas of Victoria and South Australia, causing an estimated A$96 million worth of damage.

The plague caused the destruction of standing and stored crops, livestock were attacked, vehicles damaged and electrical and rubber insulation in buildings destroyed.

“Now again in 2021 we are seeing an alarming rise in rodent numbers,” explains Gerwyn Jones. “It is therefore crucial that we monitor and put in place strategies for control”.

A mouse plague is defined as an excessive and increasing population of mice that are having an economic and/or environmental impact. The density of mice in crops, in non-plague years is normally

Mouse numbers are dependent on many factors but what is key is the difference between non-breeding winter populations and the breeding populations in spring and summer.

As mice are not long lived the size of the overwintering population is often hard to detect, but the trigger for the commencement of breeding appears to relate to the prevailing weather and food supply.

What triggers an actual plague, compared to the normal annual fluctuation of the mouse population, seems to be dependent on a number of factors:

It is also suggested that changes in agricultural practices may be increasing the frequency of mouse plagues.

Stubble retention for example will provide additional habitat and extra food from split or unharvested grain, as was evident in the 2010 winter crop harvest. Plagues will often occur following a period of drought with a subsequent wet spring and summer which provides extra food and cover.

Wheat is the main winter cereal crop grown in southern and eastern Australia and is the crop that suffers most from mouse plagues. However, mice can also damage other cereal crops, soybean, maize, sunflower, rice, lucerne and a range of horticultural crops.

They can impact farm storage areas and animal husbandry facilities, such as pig and poultry sheds and cause damage to farm machinery and vehicles.

In storage areas, mice can enter via the smallest of holes so maintaining a mouse-free store is virtually impossible. Their droppings will contaminate stored grain and livestock feed.

They are also known to transmit a range of diseases and pathogens to both livestock and humans including:

Guidelines issued by the New South Wales Government in Australia recommend monitoring and observation techniques before the use of rodenticides for control.

Once monitoring has taken place and a problem is identified then the use of rodenticides may be the only option. The most commonly used anticoagulant rodenticides used in Australia are: brodifacoum, coumatetralyl, flocoumafen and warfarin but these are not for field use and can only be used in and around farm buildings.

Two rodenticides currently permitted for field use are:

It is important that an integrated pest management strategy should be employed to reduce damage caused during a plague. This includes mouse-proofing buildings, reducing the amount of farm rubbish around buildings and employing good farm hygiene practices. These strategies will help to reduce mouse populations exploding when conditions are optimal. 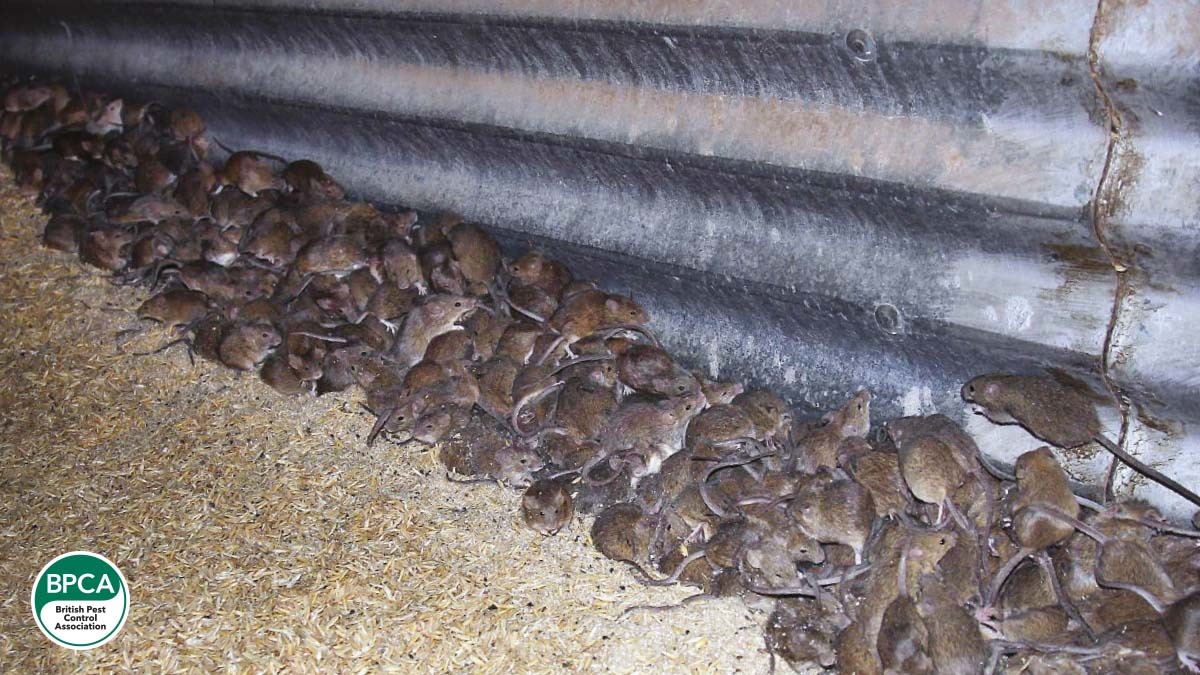 “From a manufacturer’s point of view it is quite difficult dealing with a mouse plague,” explains Gerwyn Jones. “I have personally been in the industry during two mouse plagues in Australia, and there were some challenging problems that we faced.”

“As an overseas manufacturer, PelGar usually plans to have products stored in Australia based on the previous season and forecasts given to us by customers and end users. When a plague strikes you can throw all of that out of the window. Within a few weeks, stocks that would normally last months are gone.”

“It is a real Catch 22 situation – you want to have stock to tackle a plague, but then you don’t want to be overstocked. I have seen manufacturers stock their warehouse with products, in preparation for a bad mouse season, which then did not materialise. You are then left with ageing stock and the cost of warehousing products until the next season.”

It is a real Catch 22 situation – you want to have stock to tackle a plague, but then you don’t want to be overstocked.

Research work, which focuses on understanding the mechanisms leading to increasing mouse populations, and developing predictive models, are only able to achieve 70% accuracy.

It is therefore vital that farmers and growers on the ground recognise and monitor the early signs of increasing mouse numbers and act to put control measures and management practices in place early on.

It is far easier to control a small mouse infestation than the economic and environmental impact of a plague.

With weather and the climate certainly having an influence on seasonal mouse populations, it is likely that climate change will have a significant impact on the number and magnitude of plagues in the future.

What’s coming next? Gerwyn recently gave us an update on the situation

As we go into spring, which started on 1 September here in Australia, there looks to be no let-up; everyone had hoped that a cold spell would have helped with their demise – but it didn’t come.

The professional pest control sector is ticking along quite nicely with steady sales, but it is definitely the rural/farm market that is pushing the demand for rodent bait.

Farmers are due to plant summer crops into the fields and have already noticed quite a few active mice burrows which is not a good sign, because those seeds could provide an ideal food source for the mice to consume and then breed, and the plague cycle starts all over again.